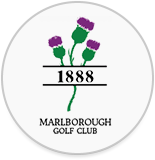 There are no news items at the moment

It all started when, in October 1888, a meeting chaired by Mr W H MacDonald, a housemaster from Marlborough College, resulted in the building of nine rather indifferent holes on Marlborough Common with a hut for a clubhouse. Progress was slow and came to an abrupt end with the outbreak of the 1914-18 War, when part of the course was used for training. The old gun emplacements are still discernible just short of the first green.

In 1920, with hostilities over, famous golf course architect Tom Simpson, creator of Sunningdale New Course and Herbert Fowler, designer of Walton Heath, were asked to produce nine new holes. The new nine-hole course was opened in 1921 and in the same year the Artisan Club (The Thistles) was formed. Eight of these holes, eleven to eighteen, though somewhat modified, are still in play today. A used officers mess hut was acquired and converted into a roomy and comfortable clubhouse.

Thus began twenty golden years. Marlborough Golf Club became fashionable and visitors included the Prince of Wales, later Duke of Windsor. However, in 1940 with the Second World War upon us, the common was requisitioned and no more golf was played for a decade. Following post-war restoration, the club was re-opened in 1950 by Marlborough Borough Council (later to become Town Council) using a railway carriage as a clubhouse!

In 1960 a new cedarwood clubhouse was built and the members took over the management of the club. Famous course architect J Hamilton Stutt (responsible for Turnberry's Ailsa Course with Mackenzie Ross) was engaged to design an additional nine holes and the full eighteen-hole course was opened in August 1974. Later, in 1988, in time for the club's centenary, today's strikingly original clubhouse was opened.

Today, we are a thriving modern members Club that prides itself on being at the heart of the local community. We have a diverse demographic, a warm and friendly atmosphere and a golf course that is continually improving year on year. We have established ourself as "Wiltshres unique parkland and downland experience" and have gained a reputation as being one of the best Clubs to join in 2021.

Our passion and committment to our members is our focus, yet we pride ourselves on being welcoming to visitors, functions and parties who wish to enjoy our facilities.